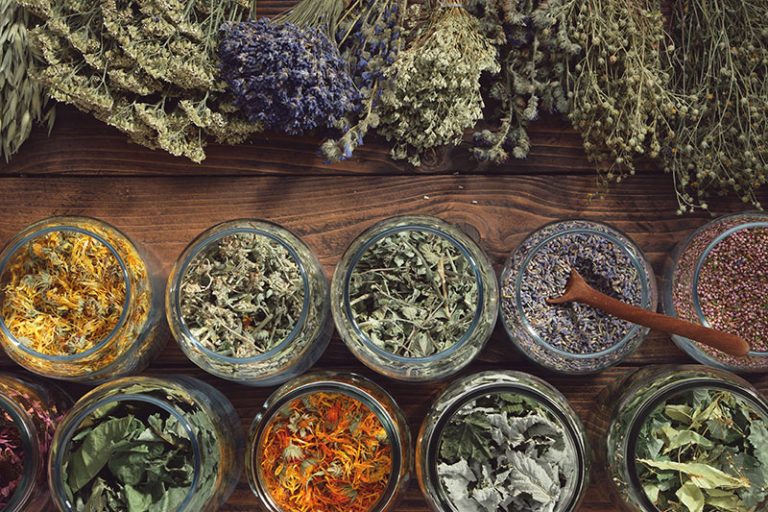 For thousands of years, herbs have been used as medicine.

We only recently started reaching for a tablet before we looked to nature. But things are changing, and many of us realize there are better answers to some health challenges than intense pharmaceuticals. I’m not saying there isn’t a place for both in our world, but botanical medicine can be the answer to many of our current problems—if we know where to look. These are the best herbs for women’s health to get you on the right path.

Black cohosh, also known as fairy candle for its long, white, fluffy blooms, has been used since the 1800s to support women’s health. It’s the most commonly prescribed herb for women’s health, especially for women undergoing difficult menopause.

What is black cohosh used for?

The plant is native to North America and has been used in the Native American community for centuries. The word cohosh is from the Algonquian tribe and means rough because of its rough underground stem.

Regardless of its origins, it is used globally for hot flashes, menstrual cramps, and to increase sex drive.

It also has a mood-boosting effect and is used to decrease irritability that may be associated with menopause.

As pretty as the feathery flower is, the roots are the most potent part of the plant. Take it in a tea, as a tincture, or in capsules.

This tall, spikey, flowering plant has been used in traditional medicine for centuries. Its hot-pink round flowers are full of naturally occurring phytoestrogens. These plant-based compounds imitate estrogen, making them suitable for menopause symptoms. When your estrogen levels dip during menopause, red clover can help because of its high amount of phytoestrogens.

It grows naturally from the US to the Far East, so it has a long history of use in Chinese traditional medicine.

What is red clover used for?

It’s commonly used as an overall herb for women’s health. It can ward off severe hot flashes (5+ per day), vaginal dryness, and night sweats. It is also used for heart disease, asthma, some cancers, and skin disorders.

If it’s growing in your garden and you don’t use pesticides or herbicides, pick it. The flower has quite a lovely taste, so steep it in a tea.

Otherwise, you can find teabags and supplements here.

Pro tip: Use it with black cohosh for a double whammy effect on hot flashes.

Chaste berry tree has played a role in traditional medicine since Hippocrates 2500 years ago. The name comes from olden times when the leaves were sprinkled at the monk’s feet to lower their libido and keep them chaste little lambs. And in some areas of Italy, they still throw the leaves on the monk’s path today.

Currently, it is used to support gynecological health, especially during menstruation and menopause—so practically our entire lives. And there is no present evidence that it, in fact, lowers women’s sex drive.

What is vitex used for?

It’s one of the best herbs for feminine health and anyone struggling to balance their hormones throughout their monthly cycle. It communicates between the ovaries and the brain to help them produce healthy levels of progesterone and estrogen and reduce prolactin. So basically, it levels out our hormones and, in turn, mood swings.

It’s best taken as a tincture. But if you can’t stand the flavor, you can opt for a tablet.

Dong quai is commonly called female ginseng because women benefit most from it. It’s one of those herbs every woman should take at some point in their life—from menstruation to menopause, it has benefits.

The root grows naturally in the cold, damp mountainous regions of China, Japan and Korea. It has been used for more than 2000 years. Its purple stems bloom with bursts of white umbrella-shaped flowers and bear fruit in July and August. But its thick yellow-brown roots are used for medicine.

What is dong quai used for?

It’s a female herbal supplement that is an antispasmodic, so it relieves cramps, irregular periods and PMS. In addition, some women report it reduces hot flashes.

In Asia, it can be injected, but here, it’s primarily administered in tablet, tincture or powder form. More often than not, dong quai is used as part of a treatment regimen. It’s rarely taken alone.

Fun fact: The fragrant white flowers are in the same family as celery.

Red Raspberry leaf is one of the safest and most effective herbal remedies for women. It’s a widely used tonic for female wellness and one of the best herbs for women’s health.

It’s been used for centuries in ancient Greece and in Ayurvedic medicine.

What is red raspberry leaf used for?

It’s another one of those great all-rounders for women’s health. It’s been taken for menstrual problems like cramps, nausea, heavy periods, moodiness, and irregular periods.

If you’re wondering what tea is good for your uterus, red raspberry leaf is the answer. It’s linked to overall uterine health and may boost fertility by strengthening your uterus. It contains fragrine, an alkaloid that relaxes yet tones the uterus. It also contains tannins which are thought to stop heavy bleeding.

Red raspberry leaf tea is the way to go. Use it when you are symptomatic. Or when you know, your period is about it rear its ugly self.

One of the best herbs for women’s health is ashwagandha. It’s been used for centuries in ayurvedic and indigenous medicine and is native to India.

What is ashwagandha used for?

It’s adaptogenic and balances the endocrine system, which secretes hormones into our blood. Balanced hormones mean fewer mood swings. It’s also a mood booster that targets cortisol and stops it from spiking.

The whole plant is made into tinctures, oils, powder capsules and tablets, which are the easiest to consume.

Fun fact: Ashwagandha is mentioned in the Kamasutra, the ancient Indian text on sexuality and eroticism, and is known for its aphrodisiac properties.

Shatavari is an up-and-coming herb that has been used in Ayurvedic medicine for centuries, and western countries are beginning to catch on.

What is shatavari used for?

The name means she who possesses a hundred husbands, so you’ve got to know it’s one of the best herbs for women’s libido. Besides boosting the sex drive, it increases overall energy levels, so get ready to romp it out! It’s going to be a good night!

The roots are dried and made into powder. Traditionally, it was mixed with milk or water and taken at night. Which is still an option. But it is sweet and bitter and not for everyone. So now, it’s available in capsule form.

Want to learn more about health and wellness? Check out all our nutrition topics here.

Herbs are taking center stage in many people’s health care routines. Not just women. And for far more than menstrual to menopausal health. Our overall health would be much better if we looked at nature first and pharmaceuticals second.

Disclaimer: We are not doctors, and this article is not intended to give medical advice. Everyone is different, and some herbs interact with prescription medicine. Do not take these herbs, or any herbs, without first discussing them with your doctor.

Caraway Non-Toxic Ceramic Nonstick Cookware: Is It As Good As You Think?