Posted inCaregiving Mind Video
Posted by By Risa Morimoto May 15, 2019No Comments 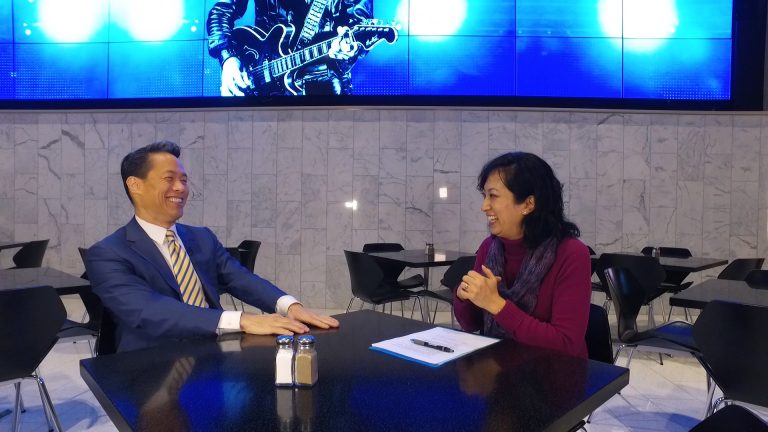 No one ever wants to get the diagnosis for Alzheimer’s Disease.   When my dad was diagnosed in 2016 for frontotemporal dementia, it was a mixture of overwhelm (we have been caring for our mom since 2001 who had a stroke and now has Parkinson’s), sadness, anxiety and frustration.   But there was also some relief since we were able to now put a name to what most of us had suspected for the last few years.  We just didn’t want to believe that it was happening to our father.

I sat down and talked with MSNBC News Anchor Richard Lui about his experiences caring for his father who now has Stage 4 Alzheimer’s Disease.   RIchard’s attitude is a breath of fresh air.  Most people utter the word Alzheimer’s or dementia and immediate depression sets in.  On the contrary, Richard wants us to find joy in the difficulty while embracing the challenges.   He still manages to laugh as do I.  It is definitely an effective coping mechanism!    He shares some of the strategies that he and his family have used over the years to ensure that his parents retain their quality of life.

I would love to hear your strategies and how you self-care.

Richard Lui is a journalist and news anchor for MSNBC, NBC News, and formerly CNN Worldwide, where he became the first Asian American male to anchor a daily, national cable news show in 2007. Lui has reported on almost every seminal international event in the last decade, including conflict and political upheaval in the Middle East and Asia, and socioeconomic challenges in an evolving global economy. More recently he reported live from the field at the Paris and San Bernardino terror attacks and in Ferguson and Baltimore during heightened racial unrest.

Outside of work, Richard travels each week from New York City to San Francisco for his father, an Alzheimer’s patient.  To highlight and raise awareness of the importance of family caregiving and health care education, Richard serves as an AARP Caregiving Champion and an Alzheimer’s Association Celebrity Champion.

Richard is also a spokesperson for UN Women, ambassador for Plan International’s “Because I am a Girl Campaign” and for anti-human trafficking group Not For Sale, and Board Advisor for Annie Cannons, an NGO teaching trafficking survivors to become software coders.

A former businessman and patent holder, Lui often addresses Fortune 500 and Silicon Valley tech firms as a thought leader in media, race and storytelling.  He is ranked in the top 1% of social media users by Twitter Counter and was named one of 21 dynamic careers to watch alongside Jay-Z and Sheryl Sandberg by Business Insider.

Caregiving: The Circle of Love – AARP