/ Blog / Blog / Cancun vs Tulum: Which Paradise Is Better for Retirement 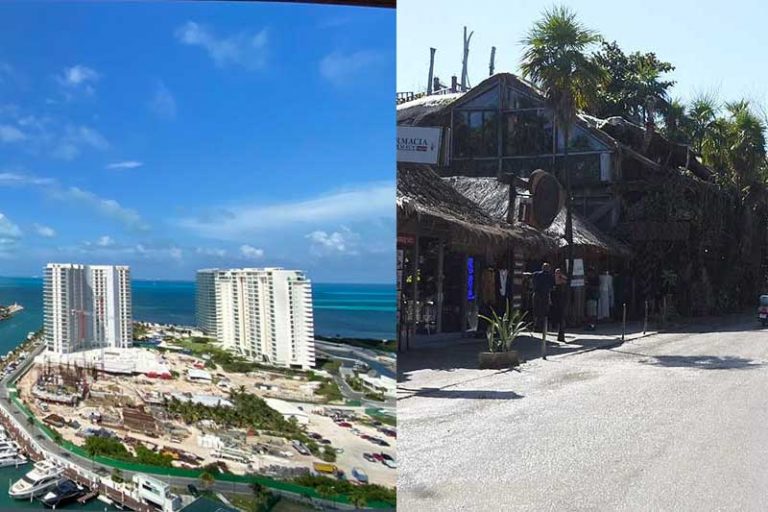 Trying to decide between Cancun vs Tulum for retirement isn’t as easy as you think. Yes, they have totally different vibes which will dictate your lifestyle. Still, one may be perfect for a getaway while the other may be ideal for life.

On the other hand, the tried and true touristy one may not be what you want for a holiday, but it could be ideal and a better choice for retirement.

Keep reading to let us help you decipher which is better for retirement: Cancun vs Tulum?

Tulum and Cancun: Where Are They?

When comparing the location of Tulum vs Cancun, there can be no winner. They are only about 80 miles apart, a quick two-hour drive.

They are both on the east coast of Mexico, on the stunning Caribbean Sea in the Yucatan Peninsula. But that is where the similarities end.

How to Get to Cancun vs Tulum

The Cancun airport has almost 500 flights coming in daily. It’s about 30 minutes outside the city center.

Tulum doesn’t have an airport. However, that is all about to change. Last year, the Mexican President announced the plans to build an international airport in Tulum by 2023.

But until then, to get to Tulum, you have to fly into Cancun and take the 2-hour drive. If it’s high-season, prepare for a 3-hour drive as the traffic gets pretty gridlocked.

To get from Cancun to Tulum, you have options—minivans, private shuttles, shared shuttles, buses and of course, renting a car are all options.

The Verdict: When it comes to ease of getting to Tulum or Cancun, Cancun takes the cake hands down.

Getting Around in Tulum vs. Cancun

Cancun is a much larger city, so having a car would be helpful. But it isn’t necessary. Instead, Ubers, taxis, and local buses get you where you need to go.

In Tulum, having a car is less necessary. Tulum Town, or Pueblo, is a small town that is very walkable. Tulum Beach, or Playa, is about 4 miles away, so walking between the two will take about an hour.

Bikes are everywhere and the easiest mode of transportation, but there are plenty of taxis and collectivos to get you from point A to B.

Parking might also be a challenge unless you live in an area like Aldea Zama, as it’s pretty limited, especially in the beach area.

Let’s be honest. Even though this is retirement, not a vacation, beaches are a deciding factor when moving to your dream retirement destination. The good news is that Tulum and Cancun both have postcard-worthy beaches. You won’t be disappointed.

So, if powder sugar beaches and aquamarine waters sound like paradise, you have found it, my friend.

The difference lies in the number of people lazing on them. Cancun is a well-traveled destination, so it’s pretty packed with tourists. As a result, there is no chance of you finding a secluded beach in Cancun. During peak season, the sea of humanity parked on beach chairs is endless. And with that comes all the vendors trying to sell you everything from jet ski rental to silver jewelry.

But despite the chaos, the beaches in Cancun are spectacular.

In Tulum, the beaches are equally as dreamy but with fewer tourists. Even though Tulum is having its heyday, it’s nowhere near as crowded as Cancun.

Overall, Tulum’s beaches are more mellow. Even the water seems to know that and has less waves than its northern neighbor. The water is also a little lighter shade of heaven, and it’s shallower.

The verdict: Tulum for the win.

The Lifestyle of Cancun vs. Tulum

The feel of Tulum and Cancun couldn’t be more different. Like chalk and cheese. Like night and day. The only similarity is that aquamarine water—the star of the show in both places. That’s it.

Cancun is a big city on a beach. So, if you retire there, you’ll have it all at your fingertips. Including all the western amenities that you’re probably used to. Like big-box chain stores and one-stop grocery shops.

Because Cancun is a touristy city, you’ll be able to find everything from taco stands shelling up $1 tacos to $100 per person meals at fine dining restaurants.

Same goes for condos. You’ll find super affordable 1 bedrooms and those that’ll cost you more than in the US.

There is a level of authenticity that Cancun lacks on the surface but can be found if you get out of the touristy zone. Cancun is more mainstream than Tulum, at least for now. But things are changing quickly.

Cancun has mega-resorts and high rises, chain stores and nightclubs galore. Tulum has a laze on the beach hippie-chic vibe. But it’s a see and be seen place.

The kind of lifestyle you’d have in Tulum is very different. It’s by no means a big city. It’s a small chic town and beach in the middle of the jungle and far less developed than Cancun. The roads aren’t even all paved. But it’s just a matter of time. It used to be a secret yoga retreat kind of place, but that secret has long been out.

It’s far more rustic than Cancun, but that doesn’t make it more affordable. Quite the contrary. It’s one of the most expensive cities in the area and the trendiest.

It’s a very chic-bohemian area with loads of upscale places to go. And you’ll probably ride a bike to get there.

There are no big box stores in Tulum. Which isn’t a bad thing. It’s just a convenience thing.

I wouldn’t say Tulum feels more authentic because it doesn’t. But it doesn’t feel like you’re going to find Senor Frogs and Walmart either.

Cancun def has a more Vegas-like vibe, whereas Tulum is more laid back with its dusty roads and trendy chic stores decorated with driftwood. It reminds me a lot of Bali. It’s hip and trendy and full of influencers.

The verdict: That’s hard to say. It depends on your flavor. Do you want everything at your fingertips at the expense of authenticity? Or would you rather not have all the easy amenities and a more rustic life? It’s really up to you.

Tulum vs Cancun Restaurants and Nightlife

Both places have everything from authentic Mexican food and taco carts to white-tablecloth upscale dining experiences, and everything in between. But because Cancun is a large city, there are inherently more options.

In addition, the nightlife in Cancun is booming so you’ll never be bored. Tulum is a much more laid-back, mellow place. There is some nightlife, but nothing compared to Cancun.

The Verdict: Cancun for the sheer number of options and because it’s known for its nightlife.

In terms of which place costs more, it’s tough to say. Tulum used to be much more affordable than Cancun, but that was before it was a trendy celeb-spotting kind of beach town.

No matter which place you choose to retire in, if you live a little more like a local, you’ll get more bang for your buck. Don’t move in the Hotel Zone in Cancun in the fanciest high rise and expect affordable housing.

Don’t only go to the international grocery stores to find all imported things, shop locally at the markets.

Once you are there for a while, you’ll find out about the secret deals those long-term travelers, expats, and retirees know about.

Tulum has growing communities like Aldea Zama which has a lot of conveniences and amenities with amazing new condos with an extra room to rent out to make some extra cash on the side.   You can expect to spend USD$200,000 and up for a one bedroom.

If you are interested in purchasing a property in Cancun or Tulum, you will want to know the basics of buying real estate in any coastal town in Mexico.

Things to Do in Cancun vs Tulum

Because the distance from Cancun to Tulum is only 80 miles, all the attractions your little heart desires are nearby both.

However, on Cancun’s doorstep is Isla Mujeres, swimming with whale sharks, snorkeling at Isla Contoy, and boat trips galore.

On the other hand, Tulum has cenotes and Mayan ruins on its doorstep.

Clearly, you can’t go wrong with any of that, and once you live there, you should definitely do all of it.

The Verdict: This is truly a Mexican stand-off. There can be no winner.

There is no denying that Mexico is getting a lot of bad press right now. Just like Chicago and Minneapolis. But that doesn’t mean you shouldn’t go there. At the end of the day, you have to choose what feels best for you.

But if you stay away from the drug trade, which includes buying a joint, not just dealing drugs, the chances of something happening are very slim. Most of the violence is surrounded by the drug trade and cartels so stay far away.

You should always use caution when traveling. And in life. Don’t walk around alone at night. Don’t wear all your fancy jewelry, and don’t take your eyes off your drink. In other words, use your common sense, and you’ll be safe in Mexico. Just like the millions of other people that travel there.

Going on a vacation is very different from retiring somewhere. And Tulum might be the perfect location for a holiday, but it might not have the best infrastructure for living there just yet.

Cancun has been a tourist hotspot for decades. That means things like stable internet, international grocery stores, and all the western amenities you might want are found there.

Whereas Tulum is just now coming into its peak. It might not have the roads, the internet or all the things that could make your life comfortable. But at the end of the day, that all depends on you and the kind of lifestyle you desire.

Health Insurance in Mexico for Expats