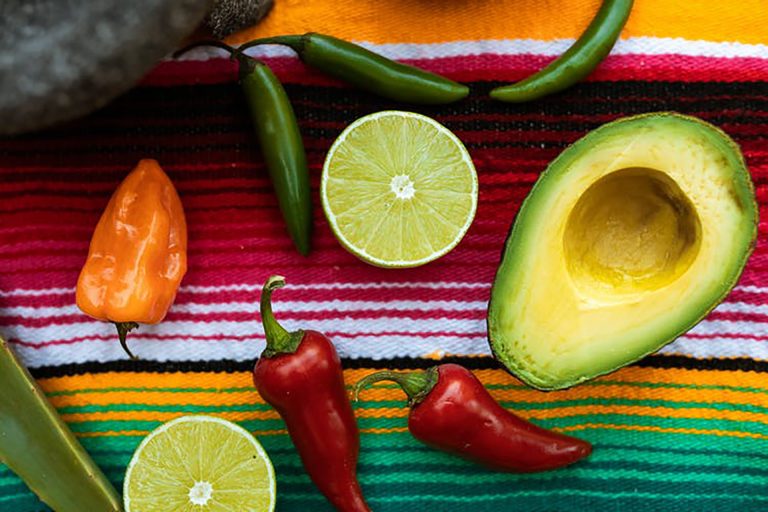 Believe it or not, there’s more to Mexican food than tacos and burritos. All you need to do is spend a little time in the country to taste some of the most unique and exciting Mexican food. And it doesn’t come stuffed in a flour tortilla. I’m pretty sure some of these Mexican food facts are going to surprise you.

So, let’s get munching…

Our first Mexican food fact may come as a shocker because a lot of people think Mexican cooking is greasy and heavy. And some of it definitely is. But not authentic Mexican cuisine.

Let’s start off with what traditional Mexican food really is. It’s not fajitas and cheese-laden everything. Instead, it’s loads of fresh veggies and fruits with a healthy balance of protein, fiber, healthy fats, and carbs.

Pretty much all authentic Mexican dishes have at least a handful of these ingredients:

Mighty nutritious for a plate of tacos with a side of beans (not the refried kind, though.)

Most authentic Mexican food is balanced, made with fresh ingredients, and usually farm to table. It’s super nutrient dense.

Order foods like ceviche or steamed fish. Or fish tacos in a corn tortilla. Get a side of pinto beans instead of the fatty refried beans, and you’ve just had a super healthy, delicious meal. So, you won’t feel bad having one more homemade margarita – just make sure it’s made fresh, not with sour syrup.

Mexican Food and Tex-Mex are Not The Same

A lot of Mexican food you get in America has been Americanized. Tex-Mex is more common than you think, and not just in Texas.

Let’s dive deeper into the most popular Mexican food – the taco.

There is nothing wrong with Tex-Mex, it’s cheesy-yummy-goodness, but it’s not authentic.

So, one of the most ironic facts about food in Mexico is that you won’t find the “Mexican” food you’ve been eating all these years – unless you go to a touristy restaurant.

It’s harder to find healthy Tex-Mex than authentic Mexican. But if your options are limited and you need your Tex-Mex fix, don’t order a chimichanga if you are trying to be healthy. Order fajitas. Order pinto beans instead of refried beans. Or just say, “Screw it!” and eat whatever your lil’ heart desires. You can’t always be good, right?

Fear Factor Has Nothing on Mexican Food

Fun fact about Mexican cuisine > insects aren’t just critters scurrying their way along the grass. Mexicans love to eat them.

Chapulines or grasshoppers? Yep. Escamoles or ant larvae? You betcha.

Eating insects in Mexico dates back to pre-Columbian times to the Aztec and Mixtecs. So, it made sense. They were plentiful, certainly convenient, and a good source of fuel.

And nowadays, high-end Mexican restaurants are going back to the roots of Mexican fare, so it’s not uncommon to see insects in fancy restaurants all throughout the country.

But it’s not just bugs that could make you feel like a contestant on Fear Factor. How about some menudo or tripe soup? Tacos de lengua or cow tongue tacos?

Most insects are full of protein so if you’re looking to branch out of the norm, try them. Plus, you won’t look like a squeamish gringo. It’s ok if you need some liquid courage, which brings me to the next Mexican food fact (or drink fact).

Tequila Isn’t The Only Mexican Drink…

Many people equate vomit-inducing parties and banging headaches with tequila. And with good reason. The cheap stuff you did shots of that night in high school is the rotgut of tequila. Proper tequila is like scotch and has complex flavor profiles like caramel and vanilla from the barrels it’s aged in. In fact, a lot of good tequila is aged in whisky or scotch barrels.

The tequila of today is meant for sipping neat or on the rocks. But, of course, there are still plenty of affordable tequilas made for margaritas, just buy a good silver or blanco tequila, and don’t buy the cheapest stuff out there.

Mezcal, tequila’s cousin, usually gets a bad rap and people assume it comes with a worm. But that’s just a gimmick. Yes, loads of those worms are found in the maguey plants. And if you’re feeling ballsy, you can find maguey worms on many a menu these days. But good brands of mezcal won’t have a worm inside their bottles.

Mezcal tastes totally different than tequila and has a very smokey profile.

Oaxaca is known for its mezcal speakeasies, so keep that in mind when you’re there.

Don’t worry if spirits are not your thing. There are plenty of Mexican beers and non-alcoholic drinks with Mexican origins. Try horchata (a white rice drink), horchata de arroz con almendras (an almond milk drink), and best of all, Mexican hot chocolate (more on that in a minute).

Looking for a healthy margarita? Find a good blanco tequila, mix it with loads of fresh lime, a little simple sugar and a bit of orange juice. And voila, you are golden. Or order a little mezcal. It’s the healthiest spirit out there.

This might be a surprising Mexican food fact, but the cocoa plant is native to Mexico.

According to legend, the Aztecs had their own Chocolate Goddess who was married to the God of Commerce, Ek Chunh. So, it’s not surprising that cacao beans were used as money back in the day. And the Aztec emperor Montezuma II drank his hot chocolate from goblets made of gold.

Mexican hot chocolate is unlike all others. It has spices like cinnamon and sometimes chili, making it taste even more luxurious than the regular run-of-the-mill Swiss Miss hot chocolate.

Other surprising foods that originated in Mexico are chia seeds, avocados, tomatoes, vanilla and dragon fruit. And wait for it….

The Caesar Salad. No joke.

In 1924 Caesar Cardini, an Italian immigrant who owned a restaurant in Tijuana nearly ran out of food. So, the fast-thinking guy ran into the kitchen, scrounged up some romaine, parm, croutons, garlic, oil and eggs and made himself a Caesar salad. Years later, his brother Alex added anchovies.

Mexican chocolate and cocoa powder are higher in flavanols than Dutch-processed chocolate. So, make it your go-to when buying chocolate.

Mexican food culture is alive and well around the world. It’s one of the most loved cuisines and even has a UNESCO title to boot.

In 2010, Mexican cuisine was honored with the UNESCO title of Intangible Cultural Heritage of Humanity.

Traditional Mexican fare is made by the entire village in a farm-to-table method. They use unique farming methods, cooking processes that increase nutritional value and special kitchen tools.

And if you’ve ever been to Mexico, you can tell that food is a source of pride and plays a significant role in cultural identity.

This is one of the coolest facts about Mexican food. I mean, a UNESCO title! For food!

So. what do you think about these Mexican food facts? Did we surprise you? Are you hungry?

Tell me your fave Mexican food in the comments below.